When I had my daughter we did a bit of musical rooms and ended up moving my son into my step-son's room.  The step-son went into the guest room and the daughter went into my son's old room... well you get the picture.  With the move, I decided to make my son's room a little more appropriate for a preschooler rather than a toddler but I of course wanted to do it as cheaply as possible and still make it look great.  I always look in magazines for ideas and inspiration and shortly after I decided on the re-do, the Pottery Barn catalog arrived.  Bingo!  I pored over each page trying to see what they were using to make the boy rooms look so good.  I kept seeing these great pieces of wall art that weren't available for purchase, they were just using them in addition to their own merchandise.  As I peered closer I realized that this great art was simply a shape cut out of an interesting type of paper (newspaper, scrapbook paper) placed on a neutral background and framed with or without a mat.  Lightbulb! I decided to make my own using the sports theme I already had going in his room and headed off to my local craft superstore.  Here is what I used to make the wall art.

I used 5 styles of scrapbook paper and used 7 sheets total.  I used a plain tan for the background (1 for each picture so 3 total), a soccer sheet (I lucked out with this one because I didn't have to create a soccer ball - I just cut out the largest soccer ball from the center of the paper), a brown "woodgrain" style for the bat, a white with red laces border for the baseball and a red/white stripe with brown smudges for the football helmet.  I basically did a freehand drawing of each on the BACK of each sheet drawing and re-drawing the lines until I got it exactly how I wanted it.  I then used the razor blade to cut out the drawings.  The football helmet actually proved to be the biggest challenge but I googled "football helmet image/s" until I found one that I liked and then looking back and forth from the computer screen to my paper, I did the same draw and re-draw process until I got it the way I wanted.  The irony is, that in my opinion the football helmet turned out to be the best!

I chose sports but this could work using ANY theme, colors, frames, etc to fit a girl or boy room.
I could kick myself for not keeping my receipts but I've added up the total and I believe I spent around $10-$12 per picture.  Of course, I chose to do 3 which made the cost somewhere between $30-$36 but I could have chosen to do 1 or 2 and still have had the same impact for less money.
I love them and think they will be on his wall for a long time!  Or, at least until I get another idea... 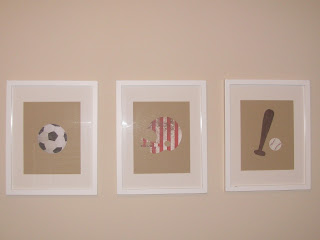